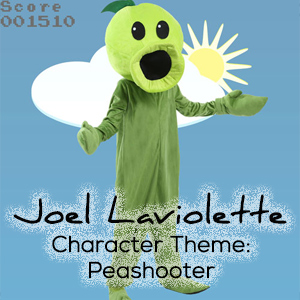 Name: Peashooter
Age: Adult
Gender: Unknown
Appearance: Green. A big pea gun for a head.
Personality: Silly with friends, but serious about his/her mission.
Role in the game: Hero
Skills: Shoots Peas out of it's face!
Goals and motivation: Zombies took over their world and Peashooter is their last hope of surviving.
Short history: Zombies are trying to take over their planet. She/He is the hero that can save them all.
Origin of Inspiration: Character
Number of Instruments: 3
What Instruments: Tribal Percussion, Marimba for melody, pad (I went overboard here and ended up adding bass as well).
sounds
Song Length: 1:05
Composing Melody: Melody-first
How the song will sound: percussive and tribal but melodic. "bubbly".