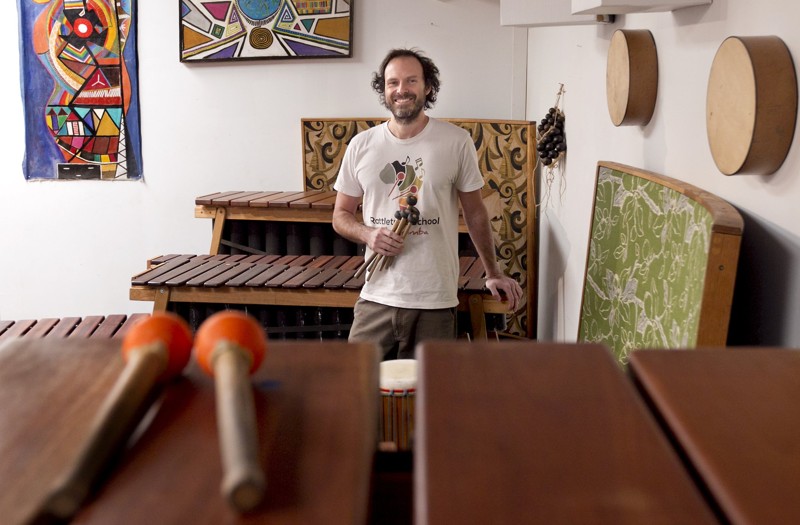 “Without community, the music can’t happen.”

Joel Laviolette is a composer, educator, builder and connector based in Austin, Texas. His musical experience spans genres and crosses borders, weaving in elements from electronica to African marimba and mbira traditions. Joel’s rich musical past has shaped his present-day focus on fusing varying musical styles into his compositions. As the Founder and Artistic Director of the Rattletree School of Marimba in Austin, Joel and his wife Rakefet ran the brick-and-mortar school until 2018.  At that time, Joel transitioned his teaching to be primarily online on Patreon so that he could give more focused attention to his international students.

In 2018 Joel had the great privilege of working with film Composer Carl Thiel (From Dusk Till Dawn, Seis Manos).  Joel was immediately hooked by the excitement and energy of the collaborative environment that can only be found in film and television.  With the coming of the pandemic and the evaporation of the live music industry, Joel decided to pivot to focus mainly on film scoring and sound design.  Joel decided to return to school and is currently a composition student at UT in Austin and is working on several projects.

With over 1,000 live shows performed to date, Joel’s unique style is informed by his love for mbira music
and modern-day electronica. Joel is the artistic director of Rattletree, a two-time Austin Music Award-winning world electronica group that combines Zimbabwean musical traditions with ethereal synth sounds in a truly unique live show experience. As the artistic visionary for Rattletree, Joel incorporates cutting-edge video projection mapping technologies to create a one-of- a-kind blend of audio and video media for live shows. His custom synth work combines the visual and the audio in an unparalleled sonic experience for audiences and music professionals alike.

Joel has been featured on NPR and has lectured and performed at SXSW, the Austin City Limits Music Festival, PASIC and at numerous schools and universities worldwide. As a member of the Grammy Recording Academy, Joel has released and produced several albums and instructional videos and builds custom marimbas and modular synths for a wide range of groups and clientele. Joel’s innovative work has been celebrated and recognized in the Austin community and beyond and can be accessed via the online music catalog.

As a longtime music industry professional, Joel’s greatest pride is the trust and satisfaction he sees in working with each of his clients. For inquiries on custom builds, sound design, sync and licensing work, please reach out to Joel via the contact form.

Awards:
Austin Music Awards “Best World Music” band (Rattletree, 2015-2016 and 2016-2017)
Esme Barrera Award for Activism and Music
Four-time recipient of the Enjoy Texas Music Grant
Grant recipient from the State of Texas to build marimbas for the Texas School for the Blind